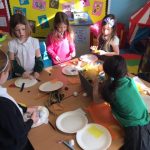 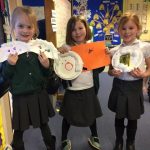 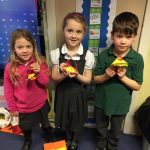 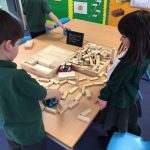 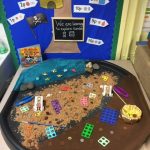 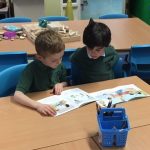 In our Relationships topic we looked at food chains. We discussed what we already knew about them. We then watched Dr Binocs who was great to watch to introduce us to food chains. We learned that the animals in a food chain depend on each other. We learned what the words producer and consumer mean. We now know that a producer is always at the start of a food chain. We explored different food chains and the animals that are in them from sea to woodland animals. We participated in various activities as individuals or in small groups.  We played a food chain challenge game on the board which we did really well in. We even took part in a food chain quiz! 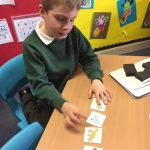 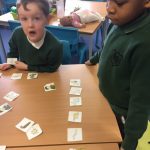 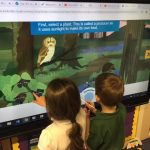 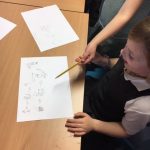 In Literacy it has been our second week of learning the ‘u-e’ sound. We watched and sang along to the Jude the Mule song where we picked out lots of u-e words. We enjoyed watching Jude the Mule fly in the parachute. That was the biggest u-e word we had ever seen! Using the magnetic boards we were shown picture cards with missing letters of u-e words. We had to show what the missing letters would be using our boards. Some of us after drew our own u-e picture cards which the class had to figure out at the end of the lesson. We also enjoyed figuring out what common words were hidden behind Bullseye and some of us played another round of common word scavenger hunt in the open area. In writing we wrote a procedure based on what we had been learning about food chains. We read the story ‘Ronald the Rhino’ and used the animals in the story to create a food chain. We had to make sure we wrote our food chain in order and described what happened at each stage. Some of us even used challenge words such as first, then and producer.

In our Money topic for Numeracy and Mathematics we have continued with adding different amounts of coins within 20p and £1 to make a given total. We have also been adding up coins to 30p, 50p and/or £2. We are still enjoying playing the Toy Shop game on the board and playing in our very own toy shop in the classroom. In Time this week we looked at the months of the year. We were able to order them correctly and say them backwards in order…mostly! We learned what the terms ‘month before’ and ‘month after’ meant too.

In P.E we looked at improving our coordination. We practised catching and throwing by participating in different activities. We played Keep the Garden Tidy, Zookeeper Tig and Flick and Catch. Flick and Catch was challenging. We discussed the challenges of it and what we could do to overcome it. We then tried it again and it got a little easier. Practise makes perfect!

Stay safe and we hope to see you again soon to share our learning.